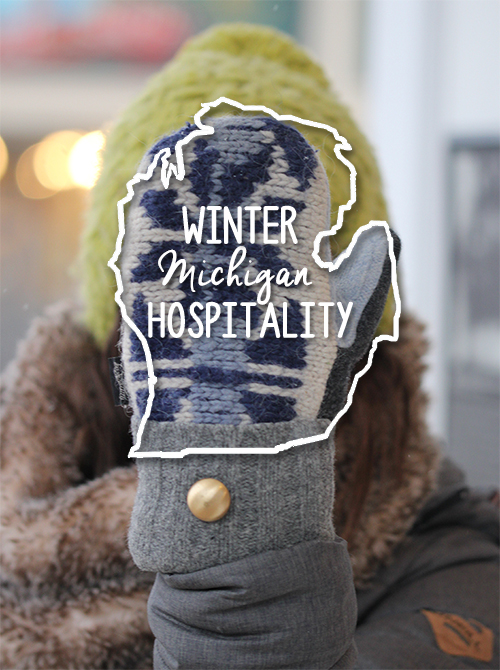 “If you can survive the winters here, only then can you call yourself a true Michigander”. These words of advice were given to me when I was seeking the “need to knows” from a Petoskey, MI local over the summer, when contemplating my official move in December. I had only visited Petoskey once during the winter months, on Easter, in fact, when there was still snow to be seen on the ground in April. So to my knowledge, those words that heeded me were only due to length of the winter… not the impact.

Soon after I made the big move, I discovered just what that woman had been talking about. The amount of snow fall at one time in this place called Petoskey is incredible! I even woke up one morning this January, looked outside, and was convinced that I had been dreaming and was in the midst of a scene from the North Pole. Inches upon inches in less than hours accumulated on the ground before my very eyes. I had begun to discover the beauty of the snow, but also my vulnerability that came with it.

Never in my life have I gotten my car stuck in the snow and ice as much as I have this winter. And it’s only the beginning! Although the sound of my tires grinding in the snow and my car rejecting my force on the gas pedal is extremely frustrating time and time again, I have developed a slightly more calming sense of ease when these type of situations arise. Each time I have gotten stuck or in a bind, there have always been numerous people stop and offer to attempt to remove me from my snow blunders.

In fact, just last week, the ice caught my wheels and I careened into a large snow bank. My car wouldn’t move an inch. I was at a pretty popular spot in town, but not at 7:30 in the morning. There was no sign of anyone coming to rescue me. But, all I had to do was wait. One car after another pulled up on the other side of the bank to check on me, and to offer their services. The man that ended up releasing me from the snow grips actually worked for the city and took the time to shovel and push me out before continuing his commute to work! I couldn’t believe the generosity locals had for an “Ohio” woman whom obviously had little idea of how to drive in the snow.

Not only that, but I am always taken aback by the kindness I receive just walking down the street or on my daily runs. No one has ever rejected my “Hellos” or “Goodmornings” whenever I offer the kind gesture. They are continuously received with a response, head nod, smile, or wave, and more times than not the people I greet don’t know me from Adam!

When moving to a new place, you want to feel welcomed, safe, and assured that you are in the good hands of your surrounding community. And, I’m proud to say that I have not felt anything less than that.

I’m sure most already know the essentials to have in your car during these wintery months in Northern Michigan, but in case you don’t, these items have been recommended to me. I am also a proud carrier of these absolute musts now:

With still so much to learn about this place,

Petoskey Through the Eyes of a Newbie

P.S. If you like these amazing Baabaazuzu Mittens pictured, you can find them here: https://grandpashorters.com/product/baabaazuzu-mittens/