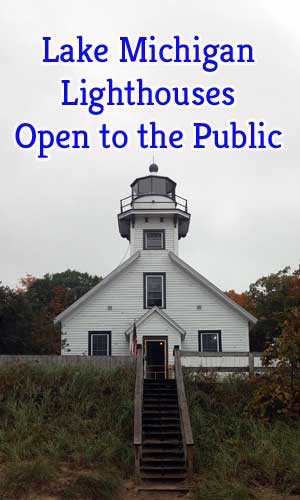 Lighthouses have such a romantic, mysterious pull, a light in the dark, bringing mariners safely home through the storm. Their unique architecture is graceful and beautiful. They are a symbol of our rich maritime history and a record of the people whose lives followed the currents of the water.

Michigan has more lighthouses than any other state. At one time its shores had as many as 247. Somewhere between 100 and 124 remain. Many are no longer in use, and sadly some are in disrepair. Several, however, have been preserved and restored. You can visit them, learn about this important part of Michigan’s past and enjoy the beauty for yourself.

The lighthouses are scattered all over the state, on the shores of four different Great Lakes. The ones on this list are located on Lake Michigan and are open to the public.

1. The Ludington area boasts three different lights you can visit. Tour the keeper’s quarters and climb the tower at  Big Sable Lighthouse. At Little Sable Point Lighthouse to the south in Mears, you can also climb the tower. To get to the Ludington North Breakwater Light you take a half mile scenic walk down the pier. If you’ve ever dreamed of living in a lighthouse, both Big Sable and North Breakwater are part of a program that allows volunteers to function as “keepers” and live in the residence quarters. See the websites for more information.

2. The Cheboygan River Front Range Lighthouse is still undergoing restoration, which gives visitors a unique inside look at the process.

3. The Traverse City area features two lighthouses. The Grand Traverse Lighthouse in Northport sits at the end of the Leelanau Peninsula where it guided ships through the Manitou Passage for almost 150 years. It’s one of the of the oldest on the Great Lakes. Mission Point Lighthouse on Old Mission Peninsula is located directly on the 45th parallel, halfway between the equator and the North Pole. Both of these lighthouses also participate in the volunteer keeper program.

4. Old Mackinac Point Lighthouse once safely guided ships through the dangerous waters of the Straits of Mackinac. Climb the tower for breathtaking views of The Straits.

5. Point Betsie Lighthouse in Frankfort marks the entrance to the southern end of the Manitou Passage. The lighthouse is still in operation today, used by the U.S. Coast Guard. The light is now automated, but the building has been restored and is open to the public for tours. A public beach is also near by.

6. Seul Choix Lighthouse in Gulliver features a classic conical brick light tower, a two-story residence and all the original out buildings. It’s also reportedly haunted. Tour the lighthouse and decide for yourself!

7.  Located in the waters of the Manitou passage off the Leelanau Peninsula, you travel to South Manitou Island Light by ferry. It’s part of the Sleeping Bear Dunes National Lakeshore and managed by the National Park Service. The residence is closed to the public, but the grounds are open and the tower is open seasonally for tours.

8. The Sand Point Lighthouse in Escanaba was restored as authentically as possible, using the original blueprints from 1867. Wreckage from the steamer Nahant rests nearby in shallow water and is a popular dive site.

9. The White River Light Station in Whitehall has a large collection of nautical artifacts. Tour the residence and climb the spiral staircase to the top of the tower for spectacular views of Lake Michigan.