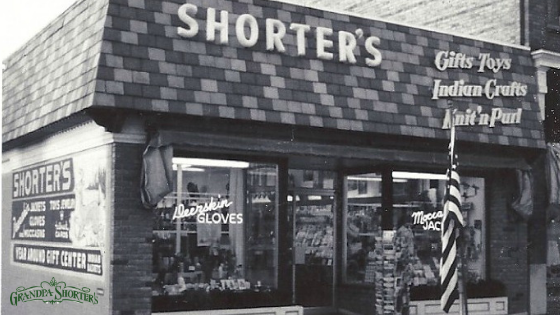 Wherever I go, I’m always on the hunt for history.  This need to know though, is just as important when I’m comfortably at home.

And what’s great about living in Petoskey is how easy it can be to locate local history.

As a reader and writer, of course I’m delighted to think about how Ernest Hemingway wrote his first novel while recuperating from his World War I injuries living in a rooming house in downtown Petoskey. I also appreciate how the great Civil War historian, Bruce Catton, once called Petoskey home. In fact, a Catton plague adorns the large boulder outside the old Carnegie Library on Mitchell Street.

Near the Perry, at the corner of Lewis and Rose streets, the bronze image of Chief Ignatius Petoskey scans the horizon beyond Little Traverse Bay. Dedicated in 2005, the sculpture honors the deep roots of the Little Traverse Bay Band of Odawa Indians in the form of the early leader who lent his name to the town.

There is more history everywhere on Little Traverse Bay as well,  where casual history buffs and serious researchers alike can find many helpful resources.

The Little Traverse Historical Museum, for example, located in the 1892 Pere Marquette railroad depot near the Petoskey marina, offers a variety of resources, including exhibits devoted to notable local women, as well as displays on those Hemingway years in the area.

The Petoskey Area Visitors Bureau suggests a self-guided walking tour of the downtown area,for example, weaving past many historic buildings.  From the St. Francis Solanus Indian Mission at the bottom of Lake Street, dating to 1854, walkers can continue up past the G&A Building in the 300 block of Lake Street, former home to Petoskey Normal Business College, that now houses retail space. In this same neighborhood, Grandpa Shorter’s Gifts operates in a storefront that has housed retail space since the 1880s.

The manageable amble also weaves past the Flatiron building, erected near the end of the 19th century close to the corner of Howard and Mitchell Streets, as well as several other historic sites in the downtown area.

In addition to the  museums, enthusiasts might check out the Petoskey Public Library, home to a useful collection of locally historic archives and documents,literary and otherwise, including a collection of early Petoskey city directories, as well as Petoskey High School yearbooks dating back more than a century.

Lumber, literature, and railroads all play a part in the area’s history, as do many other features. Students of history–armchair or serious– are never far from the deep well of Petoskey’s history.