Home » Blog » What is a Petoskey Stone?

What is a Petoskey Stone?

Petoskey is a small town in northern Michigan that is well known due to it’s beautiful beaches and famous author Ernest Hemingway. Another popular part of Petoskey is the Pestoskey stone. 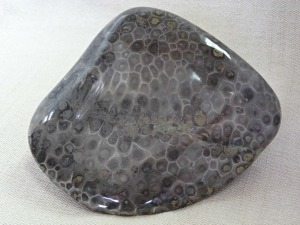 What is a Petoskey Stone? The “Petoskey Stone,” which became the official state stone of Michigan in 1965, is actually a petrified fossil coral of the genus hexagonaria. Approximately 350 million years ago, a warm, salt water sea covered Michigan. In the depths of this sea, the members of the colony coral lived.

It is a compound coral in that many animals lived together in a colony. In each hexagonal chamber of the coral lived a small salt water marine life organism. Petoskey Stones are pieces of this coral; these pieces can be as small as a marble or as large as a boulder.

When talking about the Petoskey Stone, the hexagonal chambers are sometimes referred to as the ‘eyes’. These ‘eyes’ are actually the coral’s mouth. When the coral was living, tentacles radiated from its mouth and brought in food. These tentacles are the lines coming out from the edge of the eye of the stone. The small flecks seen in the eye of the stone are the coral’s food, which became petrified along with the coral.When the sea retreated, the coral was covered in silt and mud. This silt is seen as dark streaks on the Petoskey Stone.In a time before Native American Indians moved their teepees across the hills and dunes of Northern Michigan, before even the dinosaurs roamed the Earth, a warm, salt sea covered what is now Lake Michigan. The fish that swam in this sea more closely resembled sharks than they did the salmon and lake trout swimming in our waters now.

The time was 395 million years ago, in what is now referred to as the Devonian Age. The Devonian lasted for about 50 million years and is called “The Age of Fishes” because of the prolific increase in numbers and types of fish that occurred at that time. There were several types of jawless fish and plate-skinned fishes. Many of the fish of the Devonian had box shaped bodies covered in scales as impenetrable as armor. Bony fishes, or Osteichthyes, appeared in the Middle Devonian. These fish had bony skeletons covered in slimy scales. Most of the fish in the Age of Fishes were well under a foot long. The first sharks also appeared in the Devonian. They were not the large and long sharks we have today; their maximum length was only four feet. One type, Climatius, was only three inches long!

In addition to the fish, spiders, millipedes, and insects were abundant. The first fossils of insects were found in Devonian rock. Many of the insects were wingless. At this time, vascular plants became more widespread and numbers jumped. Vascular plants use special conducting tissue to gain nutrients and water. The leaves are not what we see today. Instead, there were several small, needle-like leaves branching off the plants’ stalks. There were no roots. The first tree forests appeared in the middle Devonian. Most of the trees were seed ferns, which developed their seeds, not in cones, but on their leaves. They are now extinct.

While all of these creatures are growing and evolving, in a little bay that will someday be named Little Traverse Bay, a colony of corals is rapidly growing.

The animals in this colony extract needed minerals from the salt water and then secrete limestone that surrounds and protects them from the ravages of the predators of the sea. The formal name for Petoskey Stones is HEXAGONARIA because of the six sided shape that the limestone cups took on. 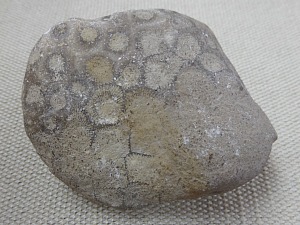 several ice ages have carved and shaped the land masses of North America, including Michigan and its Great Lakes.

The number of glaciers that came and went over the millions of years after hexagonaria fossilized pushed the corals into many different areas of Emmet, Charlevoix, Cheboygan, Presque Isle, and Alpena Counties. It is not uncommon to find Petoskey Stones many miles inland from where Lake Michigan now lies. Because most of the stones are found around Petoskey, the stone was given the name Petoskey Stone.

Want to find your own stone? Take a walk on the miles of beach of Little or Grand Traverse Bays of Lake Michigan. When dry, a Petoskey Stone is whiteish gray and is powdery to the touch; thus, it is almost impossible to distinguish a Petoskey Stone from an ordinary rock. Get out in the water and the eyes of the Petoskey Stones will jump out at you.

Stores price polished Petoskey Stones based on the clarity of the coral in the stone and the color of the stone. Stones found in Little Traverse Bay have a rich, carmel color to them. As you go away from the bay, the stones become lighter in color.