Waiting for the Other Snow Boot to Drop 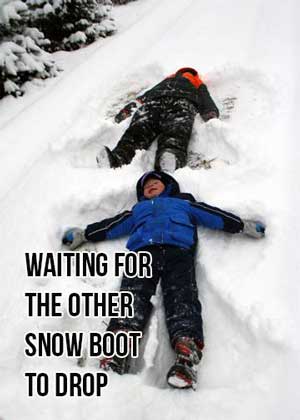 Last February, my husband and I broke down and bought a snow blower after 17 years. We were reeling from two harsh winters in a row. It’s a matter of pride for diehard Michiganders to shovel their own snow. But with both of us pushing 40, we decided we were done having sore backs from slinging the white stuff.

Then this fall, I spent a pretty penny on the warmest coats and boots I could find for all of us. Those harsh winters included multiple days with subzero temperatures and wind chills. I was determined to out layer the cold this year. Now we’re outfitted for a trek up Everest.

When I cleaned out the garage this fall, I threw out the boys’ old snow sleds. They were all scratched up on the bottoms, and that slowed them down. Then I took them to the store, and they picked out fancy, aerodynamic sleds with steering. They get so much use out of them, I figured the upgrade was justified. The boys couldn’t wait for the snow to come, so they could try out their, “Super fast!” sleds.

They waited while we had an unusually warm October.

They waited some more while we wore shorts and ate BBQ outside in November.

They’re still waiting. It’s December 11th, and we’ve only had four inches of snow this season. Snow that melted almost immediately. The forecast temperatures for the next four days are 50s and 60s.

Here we are. More prepared than ever for winter, and we’re having a tropical heat wave. Murphy’s Law in reverse.

Just to give some perspective, the photo in this article taken on December 10th, 2013.

I’ve been writing about snow, ice, skiing and how cold Michigan winters are since October. I feel like a fraud looking out my window at green grass and blue, sunny skies.

Now, don’t get me wrong. I’m not complaining. Not exactly.

It was wonderful not having to scrape ice off my windshield when I drove my kids to school this morning. I can still walk my dog on the road, because the shoulder isn’t buried under a snow bank. I don’t have to stuff kids into snow pants everyday.

But something just feels off when there isn’t any snow on the ground in December.

The Christmas tree in front of the picture window looks out-of-place against a view that looks more like early spring. There aren’t any skis strapped to roofs of cars, because the resorts are all closed. Even if they can make snow, it’s too warm to keep it from melting.

I don’t hear the buzz and whir of snow mobiles driving past the house in the evenings. The kids have all but given up hope for a snow day off school. They don’t even bother with rituals, like flushing an ice-cube down the toilet.

When I go about town running errands, meteorology is the hot topic of conversation. We never have trouble making small talk with strangers in Michigan, because the weather always gives us something to say.

In line at the grocery store, the clerk mentions how lovely the weather is. The woman in line behind me says she’s hoping for a white Christmas, because her grandkids from California are coming. They’ve never seen snow. The old man in the next line reminds of us of the winter of ‘56. “It was just like this that December. Then we got a whopper of snowstorm in January. Shut the whole state down for a week!”

We all agree that we’re just waiting for the other snow boot to drop.

Winter is coming. In the meantime, I’ll enjoy hanging Christmas lights outside in a sweatshirt instead of a parka.